On Sunday, May 3, 2015, families, friends and the policing community with gather at Queen’s Park to pay tribute to 257 police officers who have fallen in the line of duty. 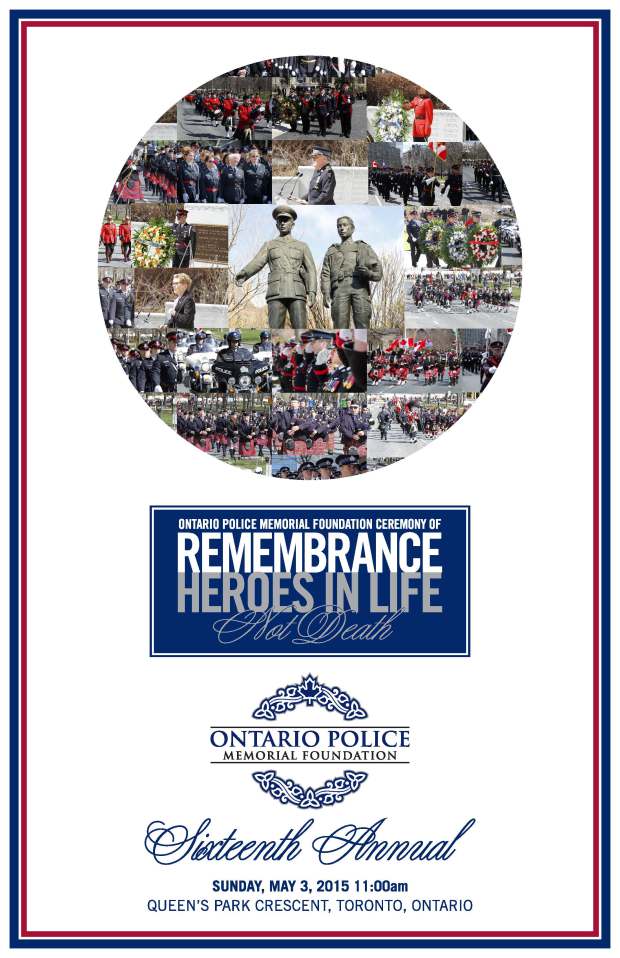 On Sunday May 3rd 2015, the 16th annual Ceremony of Remembrance for Ontario’s fallen Police Officers will take place.
All 257 names will be read aloud beginning at 10am, by two officers representing the latest graduating class of Ontario’s finest, from the Ontario Police College. Music from the Waterloo Regional Brass Band, and songs from members of the Ontario Police Choruses, will be performed prior to the arrival of the Procession of Honour.
Police Pipe Bands will lead the officers from across Ontario and the United States of America in their march along Queen’s Park Crescent arriving at the steps of the Legislature before 11am for the official start of the annual Ceremony of Remembrance.

The Ontario Police Memorial Foundation (OPMF), host of the annual Memorial Service, continues with its research, to fulfill its goal of ensuring that every fallen officer from Ontario will not be forgotten.

The architectural illumination of the CN Tower will be done in blue light on May 3rd to honour police officers in the Province of Ontario who have lost their lives in the line of duty.

The Memorial is located in a small park adjacent to the Ontario Legislature, at the corner of Grosvenor Street and Queen’s Park Crescent.
The Memorial was built from a grant provided by the Ontario Government. Official dedication Service May 7th, 2000.
The Memorial consists of two bronze statues, (approximate 2.5 m), depicting a male officer in duty dress circa 1950-1990 and a female officer in modern duty dress. The statues are mounted atop a large granite pedestal base (weighing 30,000 lbs). At the feet of the statues are eight (8) cascading granite walls. The four – (4) walls on either side of the main pedestal form a horseshoe shape. The names of all known fallen officers are inscribed on these walls, the “Wall of Honour”.
Toronto based artist; Mr. Siggy Puchta is the sculptor of the bronze statues. He has many awards and accomplishments. (1986 he designed the trophy depicting the Calgary Saddledome for the Calgary Cup Games (pre-Olympic games). In 1991, he was commissioned to create seven large Canada Geese for the Blue Water Bridge Authority in Sarnia, Ontario. In 1994, he designed the Marilyn Bell award sculpture).

This pewter pin replicates the Memorial’s Wall of Honour, which contains the names of all fallen officers who have died in the service of the people of Ontario.

The pin depicts a trillium placed within a badge. The badge is the symbol, which represents the authority of all police officers, and the trillium is the official flower of Ontario. Combined together, they represent the Police Officers of Ontario.

On August 12th, 1998, Waterloo Regional Police Constable David Nicholson lost his life while trying to recover the body of a child who drowned in the Grand River at the Parkhill Dam in Cambridge, Ontario.

In expressing their appreciation and gratitude to family and friends, Mrs. Wendy Nicholson and sons Mitch, Reid and Josh stated in part, “….Dave’s death has been painful and devastating. He was our hero in life, not death. Our memories of him are rich and immeasurable, filling our hearts with both deep joy and profound pain…”

The Ontario Association of Chiefs of Police and the Commissioner of the OPP have endorsed the wearing of this pin on an officer’s uniform. Police Officers, both active and retired, are asked and encouraged to wear the pin as a sign of support and respect for the families and our fallen comrades. 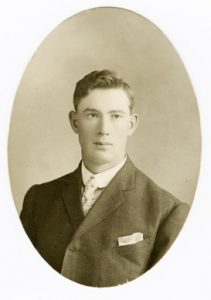 Constable John Acton joined the Toronto Police in 1904 working as a patrolman. In June 1907, while making an arrest, Constable Acton was jumped and was badly beaten by a gang of thugs in the laneway behind the Majestic Hotel (Queen St. and Ryerson Ave.) in Toronto. As a result of his injuries, he went off work and was under Doctor’s care for months. He returned back to work for a short time, but was not well enough and was forced off work again. He was hospitalized for six weeks prior to his passing. The cause of his death was listed as complications of pneumonia, which was very common with injuries to the rib area and the inability to breathe deeply.

He was single at the time of his death. 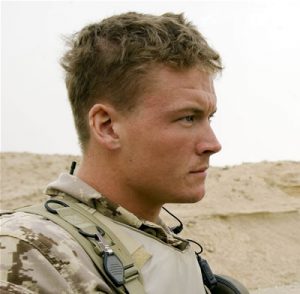 In May of 2003, Matthew Dinning joined the Canadian Forces and completed his basic training in April 2004 as a Corporal and was assigned to the Military Police. Matthew was first posted to CFB Petawawa in 2004 where he was as a Patrolman. Matthew, from near his first day, requested an overseas tour, his primary motivation for joining the Canadian Forces. In 2005, Matthew was posted to 2 MP Platoon and trained for tactical MP employment and Close Protection Security.

In January 2006, Matthew was deployed to Afghanistan as part of the Multinational Brigade Regional Command South – assigned to the security detail to protect Brigadier General David Fraser. On April 22nd 2006, Matthew was in a G-Wagon with 3 other members when they struck an IED on the roadway. Matthew and the three other members all lost their lives.

Matthew was single at the time of his death.

Joseph Prevett served in law enforcement for 16 years. He began his career with Peel Regional Police in 1998 then joined Thunder Bay in 2003.

Constable Joseph Prevett was the K-9 handler with the Thunder Bay Police. On May 7th 2014, while participating in a joint training exercise at the Ontario Provincial Police K-9 training centre in Gravenhurst Ontario, Joseph suffered a massive heart attack. He and his K-9 partner, Timber, were navigating a course when Joseph suddenly collapsed. He was transported to the local hospital where he passed away.

He is survived by his wife and family. He was 50 years of age.